New book: Rare insect species from the Republic of Moldova 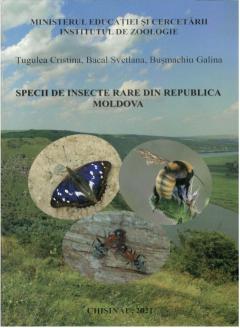 The most numerous animals on Earth are insects, exceeding one million species distributed in the most diverse terrestrial and aquatic ecosystems. Currently, 20% of the known insect species are butterflies, and about 40% – beetles. Approximately 1000 species of macrolepidoptera and 2550 species of beetles are known in the Republic of Moldova, the number of which is increasing every year due to research conducted by entomologists.

Unfortunately, in the last 30-40 years we have witnessed an alarming decline in insects. Their diversity and number decrease by 2.5% annually, and the most affected groups are butterflies, beetles and pollinating insects, especially wild bees.

The Red Book of the Republic of Moldova (2015) includes 80 species of insects, of which 31 are butterflies (8 nocturnal and 23 diurnal species), 25 beetles, and the other species are wild bees, bumblebees, mantis, ants, dragonflies, cockroaches etc., which today are threatened with extinction or are in drastic decline.

Brochure „Rare insect species from the Republic of Moldova” (authors – dr. Cristina Țugulea, dr. Svetlana Bacal, dr.hab. Galina Bușmachiu) includes a small number of rare species of insects and can be used as guide by all those who want to know the spread of the species in the country and beyond, aspects of species ecology and biology, species status and limiting factors.

The current efforts of entomologists serve a noble purpose – to protect and conserve rare insect species and their habitats. Without insects, life on Earth is impossible.